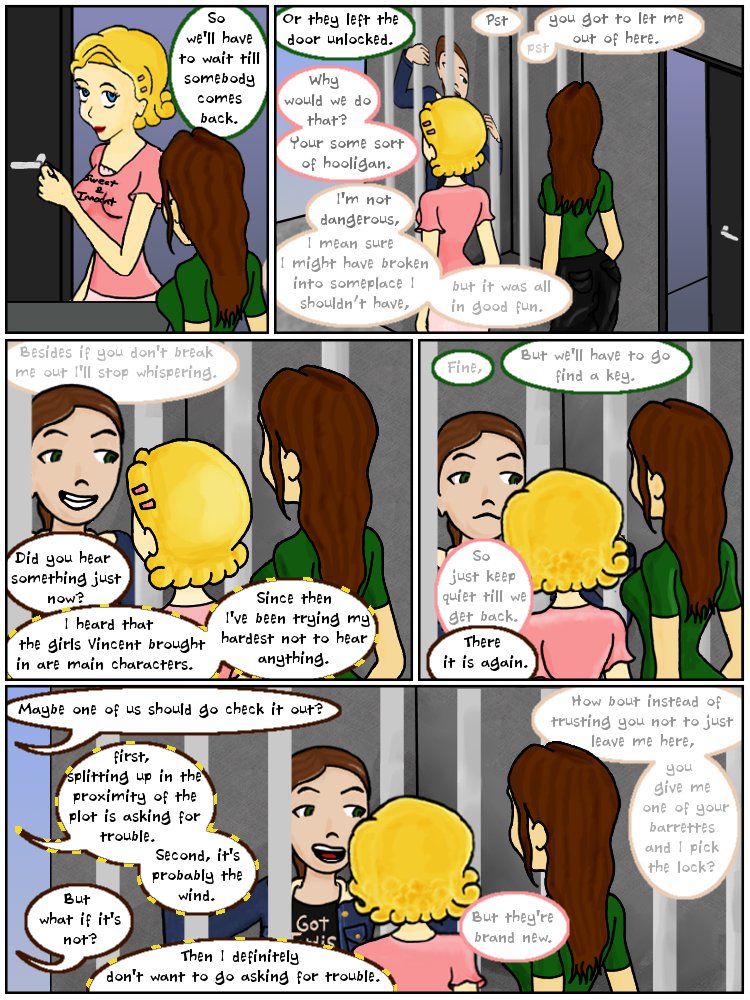 in Damsel and Distress

Kai Faydale
Sorry today's page took so long to do (although it is still technically not late I guess). I didn't hit any big snags or roll any natural 1s. I just rolled a lot of 2s, and nothing higher then a 4. on a d20. For those of you who don't speak dice both the script and paneling were bigger tasks then usual and but were slowly and steadily dealt with. However that meant by the time I got into the meat of the drawing I was fatigued. Which does not happen that often (maybe once every two weeks) so while I could still draw everything I wanted to it took three times as long as it should. Thus come 8:30 Am I had to leave for my fencing lesson (and errands I did not know about at the time) but was not done with the comic yet. Being as sleep deprived as I was I thought it would be a good idea to take a short nap before finishing the comic, so I would be able to draw faster, and preceded to sleep through 4 alarms and the next 5 hours. But at long last it is done! Now I'm can get something to eat.

tutter
Just want to make sure that "splinting up" is a typo. If not, I'm going to find out what it means and start using it in conversation.

Kai Faydale
It was a typo, but now I'm going to try and find a way to work it into conversation too ;p

Kai Faydale
Found a way. I can even work it into the plot, but sadly it won't be until a the chapter after next. then next chapter won't be as long as this one though i will be working to pick the pace up some.

Wisknort
Well, those two cops might have what it takes to survive a horror movie...

Kai Faydale
deliberate sure but still not quite how i would like it. after spending time making her different in the next three panels then covering it all up with word bubbles I choose not to fight the sleep deprivation anymore. I will probably come back and spruce it up in the next few days through.