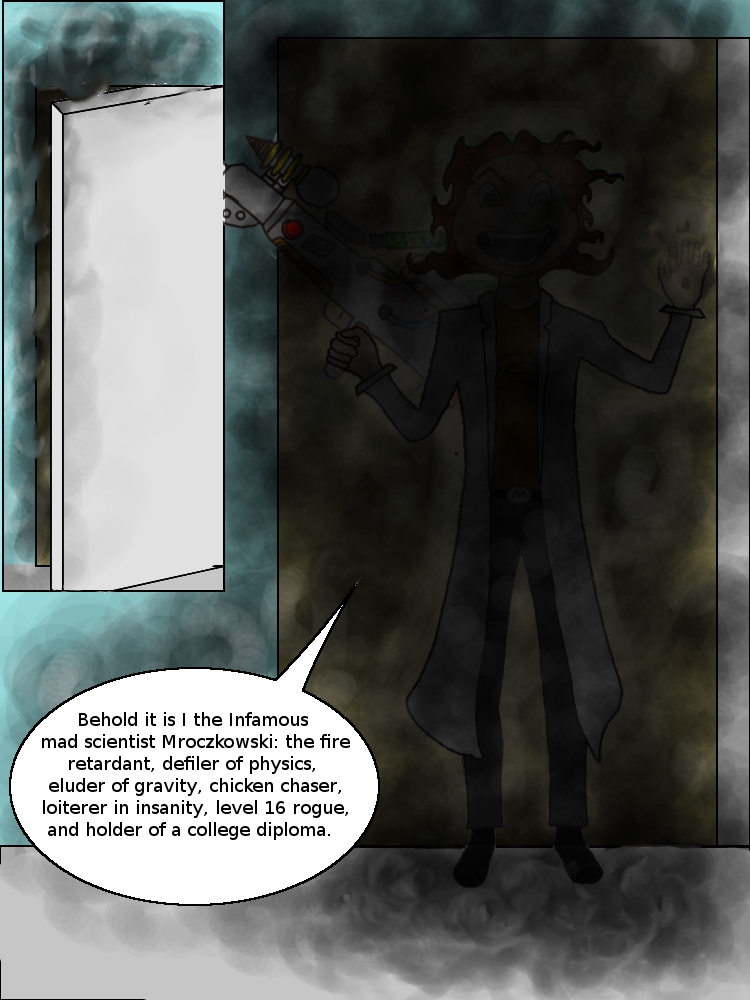 Kai Faydale
Once I started on today's page I realized that I wanted to give the second panel a bit more of a spotlight then I had previously planed so I decided to split the page into two I've already put in a fair amount of time on the second page and it should be ready soonish but I wanted to do the computer work on this one and post it as a relatively reasonable time (compared to normal posts that is). I used the same style of smoke that worked well before on this page and it didn’t quite have the Hollywood dry ice with back light effect I wanted so I might end up going back later and editing it once I figure out how to do that. For now though you have smoke billowing out of the door and him with a ray-gun big enough to make you wonder what he is compensating for.

Kai Faydale
I am a little concerned with the smoke on this page. i have dual screens on my computer and it looks fine on one and too thick on the other. I was wondering if anyone else had problems with it 50% or more of the time.

Harmsy McTwelve
You've got some edge issues around the feet, but there's a way to prevent that in the future. What I always do is make a new layer, bucket fill all the areas with the appropriate color, blur 2 pixel radius, and then Duplicate layer and merge down until there's not much left of the black lines. After that, you can either set the layer mode to darken, or you can invert the colors and set the mode to subtract. The latter option looks better if you have a lot of grays in your original scan.

Kai Faydale
I evidently did that one bit of smoke on a different layer then the rest. it was simpler to erase it and redo the smoke on the right layer and then re-flatten the image.