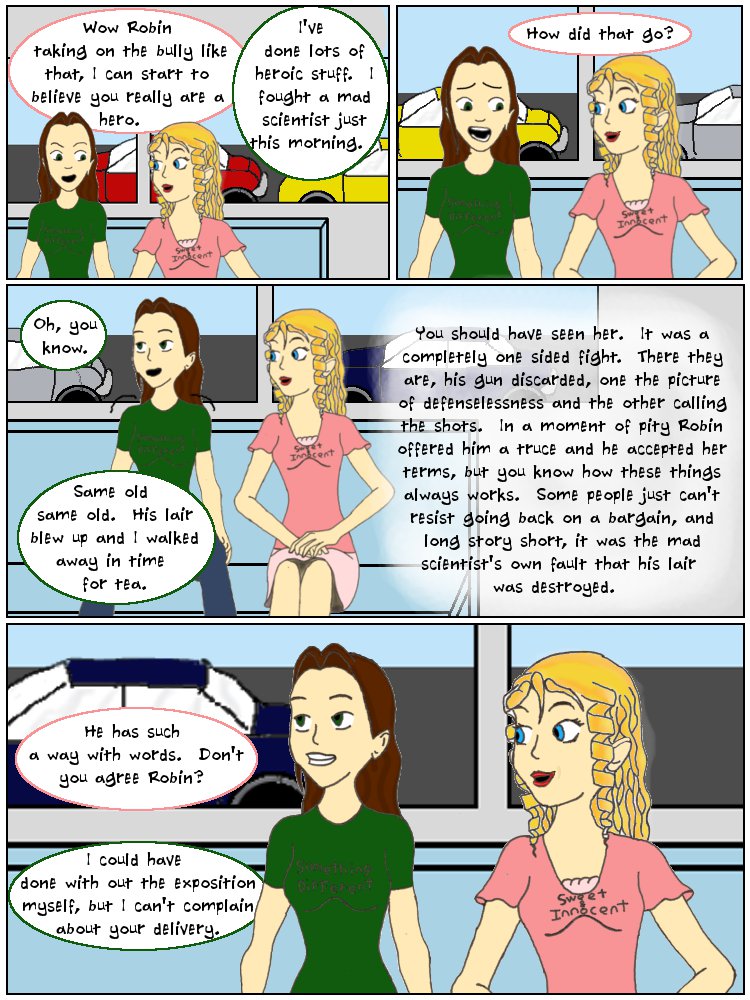 in Damsel and Distress

Kai Faydale
Life in the city is much busier then at the cabin. I knew I wouldn’t get much time to work on the comic if people were coming up for the weekend but now people want me to do things during the week too. Hopefully it will settle down a bit soon and I only have one thing scheduled for this weekend (at least that I have been told about), so I plan to put in some time and try to get a buffer.
While I have been struggling to find time to draw I have been able to work on the script a fair bit this keep as well as a side project that I will be sharing soon. Just need to get approval from kickstarter.

Twitchy Fan
The narrator's lines in panel 3 are awesome. Never has the truth been conveyed so subtly. Robin you really should keep YOUR bargain with DR.M, you know the one you made when he was acting all pathetic(about girl troubles) while you were strapped into his laser table. He didn't even need his gun by than, very one sided.

What a spin doctor... I love him even more

Kai Faydale
B.S M. hadn't come but in a while so i wanted to give him a little attention, with out him physically being here or just rehashing the same old stuff. I think this accomplished that rather creatively.

Red shirt
good call there some people keep calling him Dr. M. when it says on two different pages (8 BS & 21 Fire retardant) that he only has a bachelor's degree. thus B.S. M.

Trasee Darkwatch
A "truce" he calls it? Hoo-boy. This should be interesting to see the reaction of "Sweet and Innocent" when the terms of the "truce" is revealed. ;)

Kai Faydale
I'm looking forward to it too. I just can't pick the best location/ time for charity to find out. there are so many good ones.